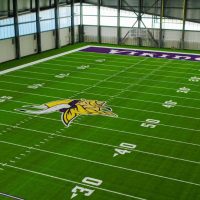 At the end of February the final pieces of turf were installed at TCO Performance Center’s indoor practice facility to complete the construction of the nearly 91,000 square-foot building. Kiefer USA installed Turf Nation’s S5 over a 23mm pad, which is the same surface that is installed at the U.S. Bank Stadium.

On Friday June 22. 2018, the Vikings held an official ribbon cutting ceremony for Twin Cities Orthopedics Performance Center, which included guests such as NFL Commissioner Roger Goodell, Governor Mark Dayton, and others. Watch the opening video that was shown to guests.

Gym floors are designed to withstand the repeated pounding and foot traffic from athletic use. Depending on the type of usage, certain gym floor materials are better suited to satisfy the needs of players and coaches.

Adolph Kiefer, who is now 98 years old, still gets in his pool at his…

How to Protect Your Gym Floor from Winter Damage