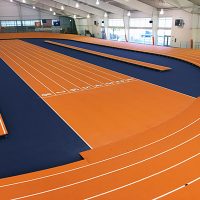 Mark Elliott, Clemson’s head coach for men’s and women’s track & field and cross country, said Mondo is generally recognized as the fastest surface for indoor tracks. In particular, he said, coaches and athletes consider the indoor track at the University of Arkansas, which is a Mondo banked track, to be the fastest in the U.S.

“Everyone wants to compete there, so we wanted to get a track like that one,” he said. “I wanted the track that is considered the fastest, and I think I’m getting that with our new Mondo track.”

Sports Flooring Types for Indoor and Outdoor Use

One of the most effective ways to prevent sports injuries is to ensure that athletes are playing on the right type of sports flooring and surfaces both indoors and outdoors. Sports flooring types are made with special care to provide shock absorption as well as a suitable surface for each sport. The following is a complete guide on the different types of sports flooring used for indoor and outdoor applications.

How to Buy Commercial Gym Flooring – Pros and Cons, FAQ

Questions to Ask Before Installing a New Hardwood Sports Floor