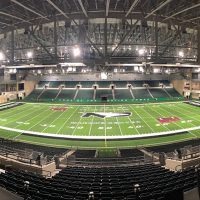 The Alerus Center is an indoor arena and convention center located in Grand Forks, North Dakota. This facility is used primarily by the University of North Dakota football team. The previous turf surface they had here had to be rolled in and out, but the new turf they installed will be the base surface in the facility. Kiefer U.S.A. installed TurfNation TN-46SM field with classic infill, installed over Schmitz Foam Pad ProPlay Sport 20. Some of the differences in the new turf from the old is the updated yard-line numbers, wordmarks and logos, and a Fighting Hawks logo at midfield. Plastic panels can be placed over the turf to accommodate other events and protect the new surface. The turf was completed at the beginning of August. UND is scheduled to open the 2020 football season Sept. 3 at home against Valparaiso. Go Fighting Hawks!!!

“This is actually an NFL-quality, state-of-the-art permanent turf solution,” Rosburg said. “So the turf will actually go from wall-to-wall, end-to-end of the facility. From a ratings-testing standpoint, it’s going to be a safer playing surface for the (UND) athletes. It will also allow the building to convert quicker.” 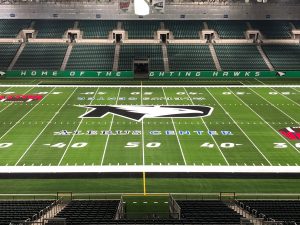 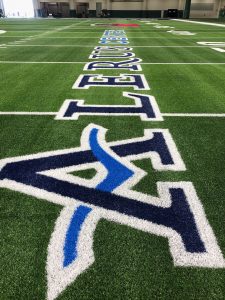 The newly renovated indoor track at Proviso West High School in Hillside, IL., is completed! Back…

The Carver Center is back and better than ever! Kiefer USA installed all new Connor…