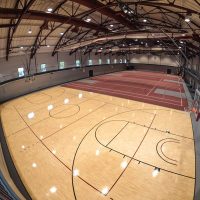 What’s the story behind the 3-point line? 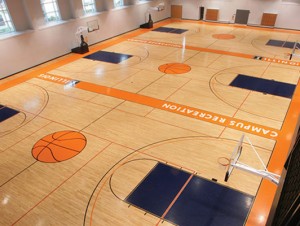 As recently as 2019, the NCAA made the decision to push the 3-point line more than 16 inches back. The NCAA Playing Rules Oversight Panel announced that the famous arc will be moved to 22 feet, 1 ¾ inches for the 2019-20 basketball season. Consequently, college basketball will be affected.

This revision of the arc matches the international distance. Schools can expect to be financially impacted by having to shift their court’s 3-point line. Due to potential financial constraints, the change will be implemented in Division II and III schools in the 2020-21 basketball season.

As a fleeting newsworthy topic, shifting the 3-point line to its new position will hardly be noticeable to fans. Unless a major team has a dreadful time shooting from the perimeter, basketball fans will have much more to rave about than the 3-point line.

Why did the NCAA move the line? 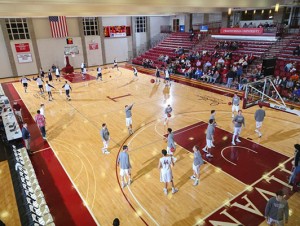 So why did the NCAA decide to move the line? Their reasoning was based on the premise that a complex 3-point shot made from a longer distance would benefit the offense, albeit at the expense of the defense. Offenses simply have more room for cutting without the ball and drives.

Freedom of movement has been a goal for the NCAA for years. But, with the implementation of the new 3-point line, some teams have seen a drop in accuracy. Basketball players made only 33.5 percent of their attempts at shooting from the new perimeter.

Shooters who are high-volume, however, will hardly sway from their track records from the new distance. Less-effective and average shooters will experience the hardest hit. It is foreseeable that the new line will be readily accepted and 3-point attempts will resume an upward climb.

What does the new 3-point line mean for colleges? Division I schools will have to update their basketball courts to reflect the change. The updated rules require that all Division I school courts be repainted with the new game lines before the 2019 season begins.

The NCAA took into account the potential financial constraints and extended the time for compliance for Division II and Division III schools. These schools need to comply with the new rules by the 2020-21 season. However, updating the courts as soon as possible is feasible.

Should schools redesign their courts? 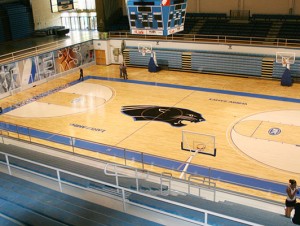 With the 2020 deadline already here, schools should act fast to update their courts. Besides updating the 3-point line, schools might take this opportunity to redesign their courts. Design and installation solutions may include court markings, court striping and court floor decals.

Resurfacing the basketball court at this opportune time is also recommended. Any cracks or bumps on the court will lead to sports injuries in players. Resurfacing the court and repairing cracks give athletes a comfortable and vibrant surface upon which to play.

Redesigning the court while repainting the game lines is practical. Some college courts have gone all out and added extravagance to the basketball court. The court at the UIC Pavilion, for instance, features an over-the-top design with the Chicago flag and flames representing their moniker.

San Jose State forewent the traditional wood-colored floor and opted for five massive Spartans lined across the basketball court. Long Beach State added palm trees to their court to represent their state and add extravagant flair. Cal State Fullerton did the same but in a colossal way.

Having a grand basketball court is not only aesthetically pleasing, but it acts as an extension of the school’s brand. A well-designed court attracts top players and showcases sponsors. A court design has the power to act as an identity and serve the team as fans across the country watch.

While eye-catching designs are undeniably appealing, the retention of the playing surface quality and appearance are important. A bold court appearance will be pricey, though. The University of Oregon’s generous staining and graphics of its court exceeded the cost of the floor itself.

Given that college basketball courts will have to be repainted to comply with the updated NCAA rules in regard to the 3-point line, facility managers are presented with an immense opportunity for a complete overhaul, especially with adding an embellished court design and/or resurfacing. 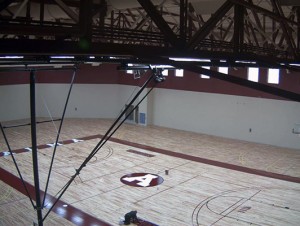 Kiefer USA is positioned to deliver the best in court design and installation. Our team will guide you through the entirety of the process, leaving you with full satisfaction. Athletes will take pride in playing on a quality floor. Kiefer USA is committed to offering top-quality products and services.

Existing customers include a variety of educational institutions, from Eastern Kentucky University to Indiana State University, with its vibrant blue colors. We’ve designed and installed the best in hardwood flooring to schools and colleges in communities in Illinois as well as across the country.

If you plan to update your gym floor, consult Kiefer USA right away. We’re the leading supplier of basketball courts. Friendly representatives are standing by to guide you from the design phase through installation. Give Kiefer USA a call for unbeatable service.

The Fieldhouse – How Its Role Is Changing

The new Wellness and Recreation Center at St. Ambrose University will have 80,000-square-feet of space.…