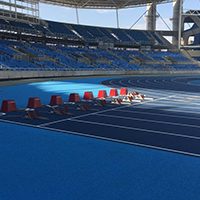 The new Mondo track at the Olympic Stadium in Rio De Janeiro installation is complete.

Competitors test the new track and field venue with less than three months until the Olympic Games.

Nearly 400 athletes from 24 countries gave the renovated Olympic Stadium in Rio De Janeiro a complete workout from Saturday, May 14th to Monday, May 16th, in the last test event for the Rio 2016 Olympic Games. The competitors were the first in the world to try out the stadium’s brand-new blue running track installed by Mondo

Athletes who participated in the Ibero-American Athletics Championships, which this year served as a test event for Rio 2016, said they had found the track, Mondotrack WS,  fast to run on; their comments echoed those of athletics legend Sebastian Coe, the two-time Olympic 1500m champion and current International Association of Athletics Federations (IAAF) president, who said the track was likely to inspire record-breaking performances.

Mondo’s race goes on: unstoppable, fast-paced and always in the name of sport!