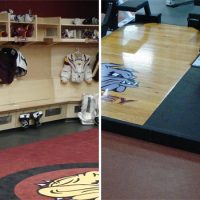 The journey began on December 30, 2010 when the puck dropped for the first time at the new 6,764-seat AMSOIL Arena. Kiefer’s contribution to the University of Minnesota – Duluth’s new arena features Mondo Sport Impact in the weight and fitness area, hallways, corridors and in the locker rooms. The resiliency of Sport Impact helps keep the facility looking new for the Bulldogs … make that the NCAA Champion Bulldogs.