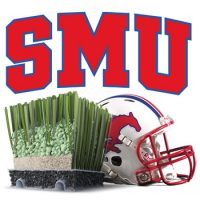 In each of the past two seasons, SMU football earned a bowl berth and a share of the Conference USA Western Division championship. When the 2011 season kicks off, the Mustangs will line up on a new, championship-caliber field at Gerald J. Ford Stadium.

SMU is installing a state-of-the-art FTS3l artificial turf system manufactured by Mondo, the global leader in the sports flooringmarket. SMU officials wanted the new field to come from a company with a proven reputation for the highest quality products, said Steve Orsini, SMU’s director of athletics. “We wanted to make sure that the field we chose would perform at the highest level for college or professional sports.”

Installation began in early February and is scheduled for completion by the end of March. The new field will replace the school’s old artificial turf field, which had reached the end of its useful lifespan after eight years of play. “Our program emphasizes speed and we rely on the speed of the players, so we wanted a field with speed characteristics that were the most similar to natural grass,” said Orsini. “The product-and the research behind it-gave us confidence that we were minimizing the difference between natural grass and artificial turf.”

While Mondoturf‘s high-density Ecofill infill creates a stable and uniform playing surface, and the field’s impact performance and energy return are the most like natural turf, the product’s durability was another important characteristic for SMU. In addition to intercollegiate football practice and games, the field also is used for men’s and women’s soccer practice, men’s and women’s club lacrosse, and sports camps. Plus, the university wanted a field that would lessen the impact of Dallas’ scorching summer heat. Ecofill infill is a patented, environmentally friendly, factory-manufactured polyolefin-based granule infill that is not made from reground tire pellets, which are commonly used by other artificial turf manufacturers, so it retains less heat than the black rubber granules found on other artificial turf fields. “It’s a huge point for us to be able to say that we’re going to reduce the field’s heat radiation during the summer months,” Orsini said.

The field’s groundbreaking 3NX fiber has proven core characteristics that allow it to perfectly mimic the responses of natural grass, and to do so with outstanding resilience and durability while offering superior player comfort.

The FTS underlayment is a prefabricated shock pad/drainage system made of recycled tire granules that are treated and encapsulated in polyurethane, preventing the possibility of contamination. The underlayment compacts less than traditional systems, so the field’s play and performance characteristics remain consistent throughout the entire surface, ensuring optimal play and outstanding ball action while minimizing the risk of injuries to athletes, even if the infill migrates. SMU also had previous experience with Mondo products: The floor of the football team’s weight room is built with Mondo’s Sport Impact inlaid platforms.