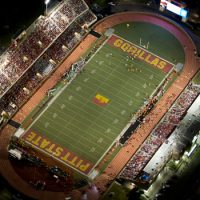 The Division II football champs will be installing a state-of-the-art artificial turf system from Mondo at Carnie Smith Stadium in Pittsburg, KS. The turf system consists of Mondo’s 3Nx monofilament fiber and their innovative thermo-bonded backing.Mondo’s 3Nx turf fiber was engineered by Mondo as a “natural sliding feeling” fiber to resemble the characteristics of natural turf. The 3Nx fiber’s semi-concave structure and unique composition create a durable turf surface with optimal dimensional memory and resistance to environmental factors. Mondo’s thermo-bonded backing creates an incredibly strong bond with the fibers and is over 90% porous, improving field drainage by over 4 times that of traditional turf backing.

Tim Beck, Head Football Coach at Pittsburg State University, praises the Mondo system by saying, “We visited a number of facilities and feel like Mondoturf stood out from the rest. The look and feel of their turf is just different. We believe Mondo offers a great product, and we look forward to having their surface on our field.”

Beck adds, “We have been very fortunate to have a strong tradition of excellence here at Pitt State, and we believe our partnership with Mondo will play an important part in our future success.”